Healthcare expenses have been on the rise for the past 60 years. In 1960, healthcare made up just 5% of United States GDP, compared to 20% in 2020. On top of that, general inflation experienced the most dramatic increase in 40 years in February 2022 compared to the same month in 2021. To better understand how these inflation trends are affecting first party auto casualty claims, Enlyte analyzed its medical bill review data from losses Q1 2017 through the end of Q4 2021. Below, we’ve outlined the key trends and patterns in first party auto casualty claims for this time period.

Medical Inflation at the National Level

The graphs above show first party auto casualty charge and allowed per unit, respectively, at the national level for professional services.

Since the start of 2017, physician charge per unit has increased 4% for auto casualty first party claims, while allowed per unit increased 5%. The 5% increase is primarily due to fee schedule increases in states with large volumes of claims such as New York. In comparison, the Bureau of Labor Statistics Physician Services Consumer Price Index increased 6% in the same time period.

The charts above demonstrate first party auto casualty charged and allowed per unit, respectively, broken down by the service groups of: emergency department, evaluation and management and pain management.

The emergency room has been a major driver of medical inflation, with significant increases in charged and allowed per unit since 2017. Much of these changes are driven by cost shifting from Inpatient to Outpatient services. Here are some key findings by service-level group:

The charts above demonstrate charged and allowed per claimant for some of the most frequent service groups seen in auto first party medical billing data.

The charts above demonstrate claimant injury distribution as well as charge and allowed per claimant for specific injury classifications.

While the distribution of injury types for first party auto casualty claims has remained relatively steady since January 2019, some specific injuries have driven up costs for these claims. 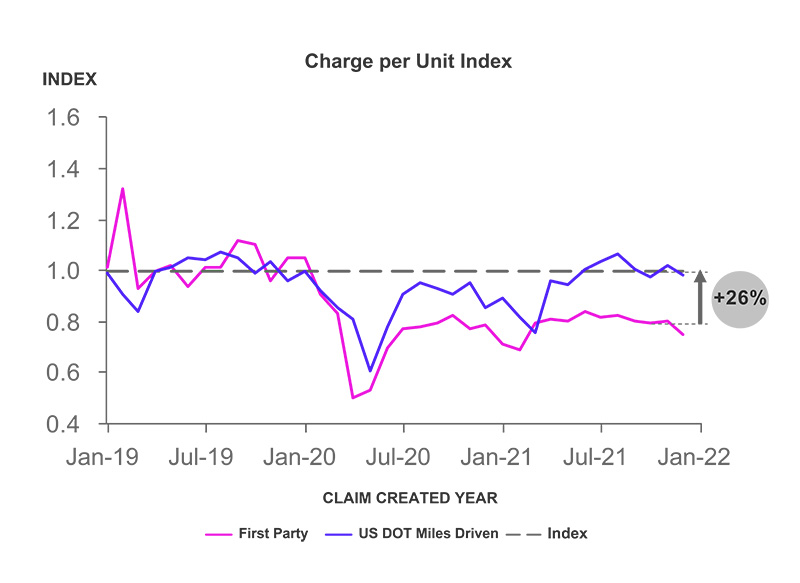 To put these trends in more context, it is important to also understand how first party auto casualty claim frequency has been trending. As a result of the pandemic, we have seen significant shifts in driving habits, with two clear downturns in miles driven (March 2020 and January 2021 respectively) corresponding with the start of the pandemic and the emergence of the Delta variant. This dip in miles driven has resulted in lower claim frequency while miles driven has returned to pre-pandemic levels. As of January 2022, claim frequency still remains 26% lower than expectations.

This report is generated based on Enlyte’s first party auto casualty Medical Price Index, which consists of  medical bill review data. The data in this report is compiled  from losses during Q1 2017 through the end of Q4 2021. Our data represents the most comprehensive and largest data set available for this market segment in medical bill review.