The first quarter of 2022 saw average Length of Rental (LOR) for collision replacement-related rentals increase 4.9 days when compared to 2021. This nearly five-day increase continues the trend of unprecedented industry increases, including an almost four (3.9) day increase in the fourth quarter of 2021.

While January is a traditional LOR peak time (along with June), historically the numbers tend to decrease in February and March. This stayed true in 2022 — but the numbers this year were much higher, with several industrywide issues contributing to these extraordinary results. 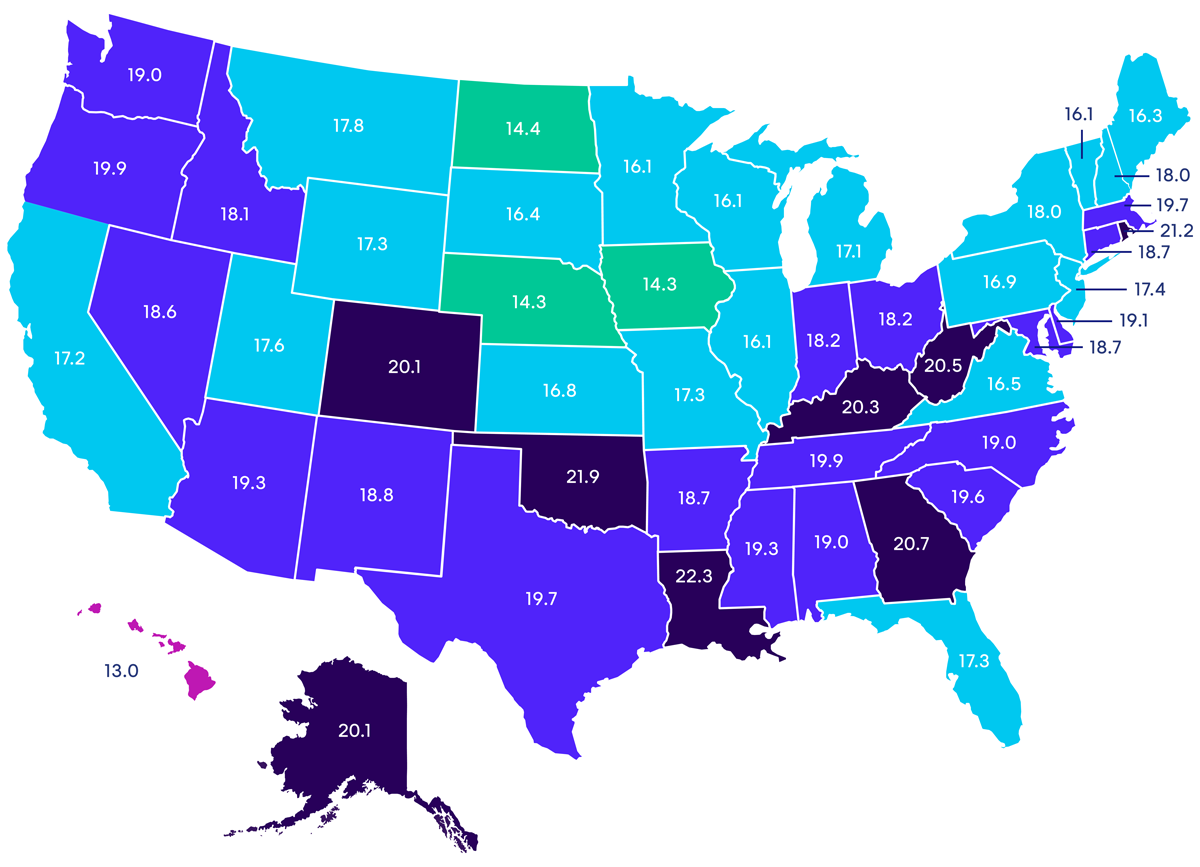 The state of Washington recorded the highest overall LOR increase of 7.2 days (from 11.8 days to 19.0). Notably, Washington was in the bottom 10 states overall in Q1 2021. Nine other states experienced increases higher than six days, while 28 states plus the District of Columbia recorded increases of more than five days. Hawaii had the lowest increase with 1.5 days, while Nebraska and Iowa had increases of 2.8 and 2.9 days, respectively.

Louisiana had the highest overall LOR of 22.3 days while seven additional states had LOR exceeding 20 days. It’s telling that, in Q1 2021, the highest LOR in any state was Louisiana at 16.4 days. One year later, only nine states and the District of Columbia have a lower LOR than Q1 2021’s highest mark.

Regionally, no one was immune to these trends. The Southwest, Northwest, Southeast and Mountain states all had LORs of 19 days or more, meaning the drivers of these LOR increases are national issues with deep causal factors, including part delivery delays, shop production capacity and the impact of new technologies such as electric vehicles (EVs).

With respect to parts, Greg Horn, Chief Innovation Officer for PartsTrader, shared: “We saw a record high of the median delivery days for all part types. We measure the median plus two standard deviations to capture the complete picture of all parts needing to be replaced.” He continued, “What we saw in the first quarter of this year is a median score of 15.6 days for the outliers. This is double of the median delivery days (plus two standard deviations) for the outliers that we saw in Q1 2021. As Enterprise has found, no region was immune from these delays; we saw significant increases in all regions in the U.S., with the highest increases in the upper Midwest and East Coast.”

John Yoswick, editor of the weekly CRASH Network newsletter, weighed in on shop production capacity. “The length of rental for the first quarter doesn’t come as much of a surprise based on what we were seeing in terms of the backlog of work at U.S. body shops at the start of the year,” Yoswick said. “Our survey of nearly 500 shops in January found that if you wanted collision work done right away, you likely would have needed to call more than 100 shops before finding one that could start work immediately. The average scheduling backlog jumped to more than a month in January, reaching an average of 4.5 weeks nationally. That is more than a week longer than the record-high Q4 2021 backlog.”

According to Yoswick’s research, the Q1 2022 backlog was almost 2.5 times the length of the typical first-quarter backlog. Since 2017, his research shows the average backlog for the first quarter has been just under two weeks. In addition, a record 84% of shops in January said they were scheduling new work two weeks or more into the future, and more than half of all shops (52%) said they were scheduling new work more than four weeks out.

“The percentage of shops that might be able to fit you in within a week? Only 3%,” noted Yoswick. “An astonishing 15% of shops are reporting a backlog of more than eight weeks.”

Looking at the data by region, CRASH Network’s data showed the longest backlogs were in the Mid-Atlantic states, where the average was 5.4 weeks. The South was close to that, at 5.3 weeks, and the Midwest was reporting a 4.9-week average backlog. Only one region, the West, reported a backlog of less than three weeks. But with an average of 2.4 weeks there, customers were waiting twice as long as the typical 1.2 weeks reported in that region in prior years. Ten of the 11 regions reported the longest average backlogs since CRASH Network began reporting the statistic in 2017.

While still a small factor, the impact of EVs is important to consider. Increased gasoline prices alongside increasing consumer demand have made EVs more popular. EVs are also more difficult to repair due to equipment and safety considerations. Ryan Mandell, Director of Claims Performance for Mitchell International, offered thoughts regarding full battery electric vehicles (BEVs): “BEVs reached their highest-ever frequency as they accounted for 1.66% of repairable claims in Q1 2022, compared to 0.42%, 0.74% and 1.01% in the first quarter of 2019-2021, respectively. On average, BEVs are 27.83% more costly to repair than internal combustion engine (ICE) vehicles and require an average of 5.76 more labor hours per repair, resulting in longer keys-to-keys cycle times.”

Drivable LOR for replacement rentals was up 4.1 days nationally in the first quarter of 2022 (11.4 days to 15.5 days). The state of Washington had the highest overall increase of 5.6 days, while eight other states had increases greater than five days. An additional 19 states, as well as the District of Columbia, saw increases greater than four days. Oklahoma and Louisiana had the highest overall Drivable LOR at 18.9 days, while Hawaii (10.9 days) and North Dakota (11.0) had the lowest. Hawaii also had the lowest Drivable LOR increase, up 1.2 days, followed by Wyoming, Iowa and Nebraska, all with increases less than two days.

While Drivable replacement rental LOR was certainly up, the highest increases were for Non-drivable replacement rentals. The first quarter of 2022 was 7.8 days higher than the previous year, at 26.7 days compared to 18.9 days in Q1 2021. Eight states had increases greater than 10 days: Washington at 12.1 days higher, South Carolina at 11.1 days higher, followed by Maryland, Oregon, New Mexico, Louisiana, Oklahoma and Idaho. An additional seven states had increases greater than nine days, while another 14 states and the District of Columbia had increases of eight days or more. The lowest increase was in Massachusetts with 4.1 days higher, followed by New York at 5.1 days, Mississippi at 5.4 days and Hawaii at 5.6 days.

For the first time, five states had average Non-drivable LOR greater than 30 days: Louisiana, Oklahoma, West Virginia, South Carolina and Oregon. Nine other states were at 29 days or higher, followed by eight other states at 28 days or more. The District of Columbia came in lowest at 23.1 days, which was still 8.7 days greater than Q1 2021.

The average LOR for replacement rentals associated with Total Losses was 18.4 days in Q1 2022, up 4.1 days from Q1 2021’s 14.3 days. While some of this rise may be attributed to the increased severities of collisions, it also could be impacted by higher Total Loss thresholds and carrier calculations, pushing more vehicles into the repairable category.

According to Mandell, this trend is likely to continue. He observed, “As Actual Cash Values (ACV) rise, we can expect Total Loss frequency to decline as more borderline losses are deemed to be more economical to repair. This has been the case in the U.S., which saw a 16.1% Total Loss frequency in Q1 2022, compared to 17.2% in Q1 of 2021. Such a scenario could impact shop capacity, especially in the face of a tight labor market, and drive keys-to-keys cycle times even higher.” 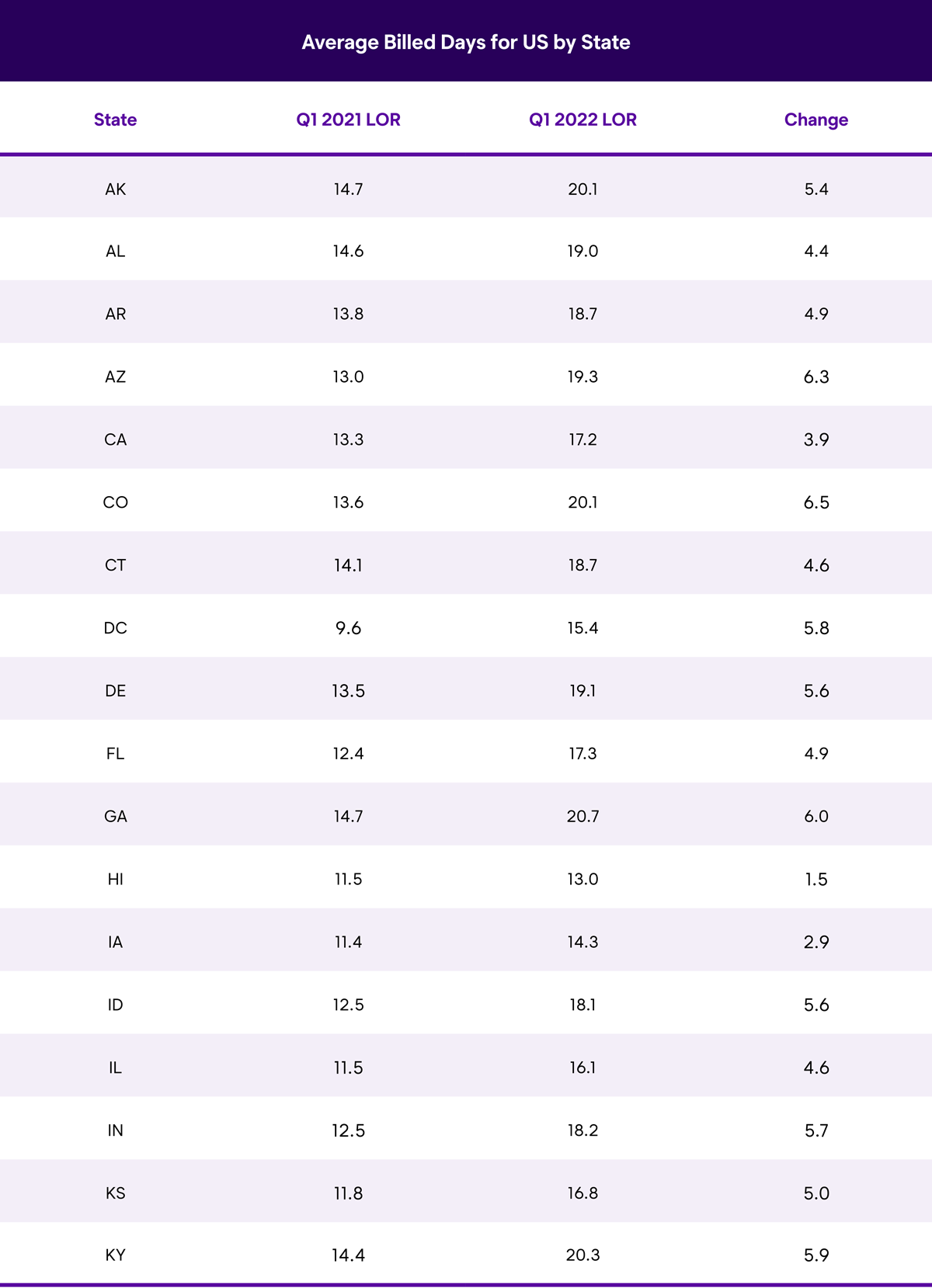 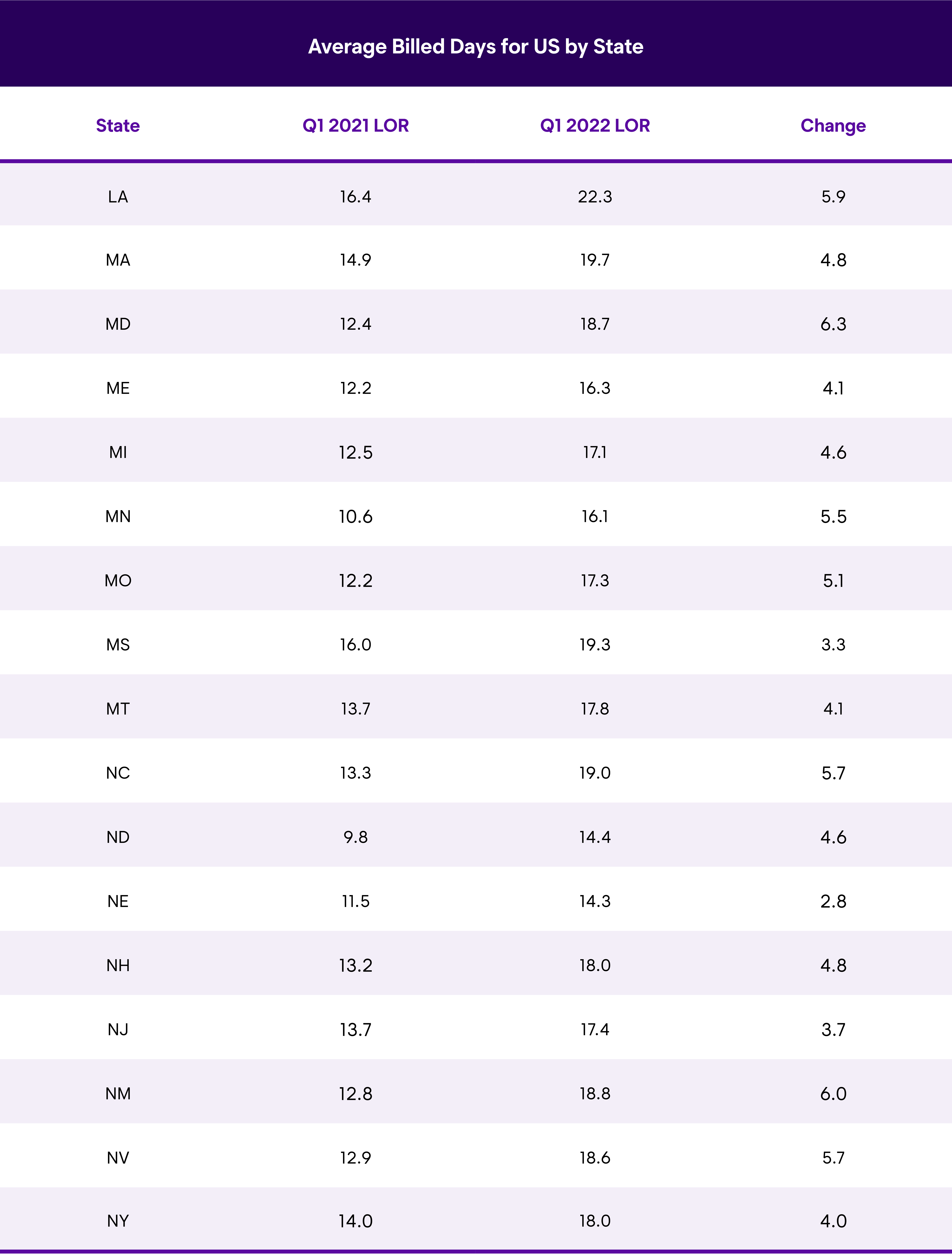 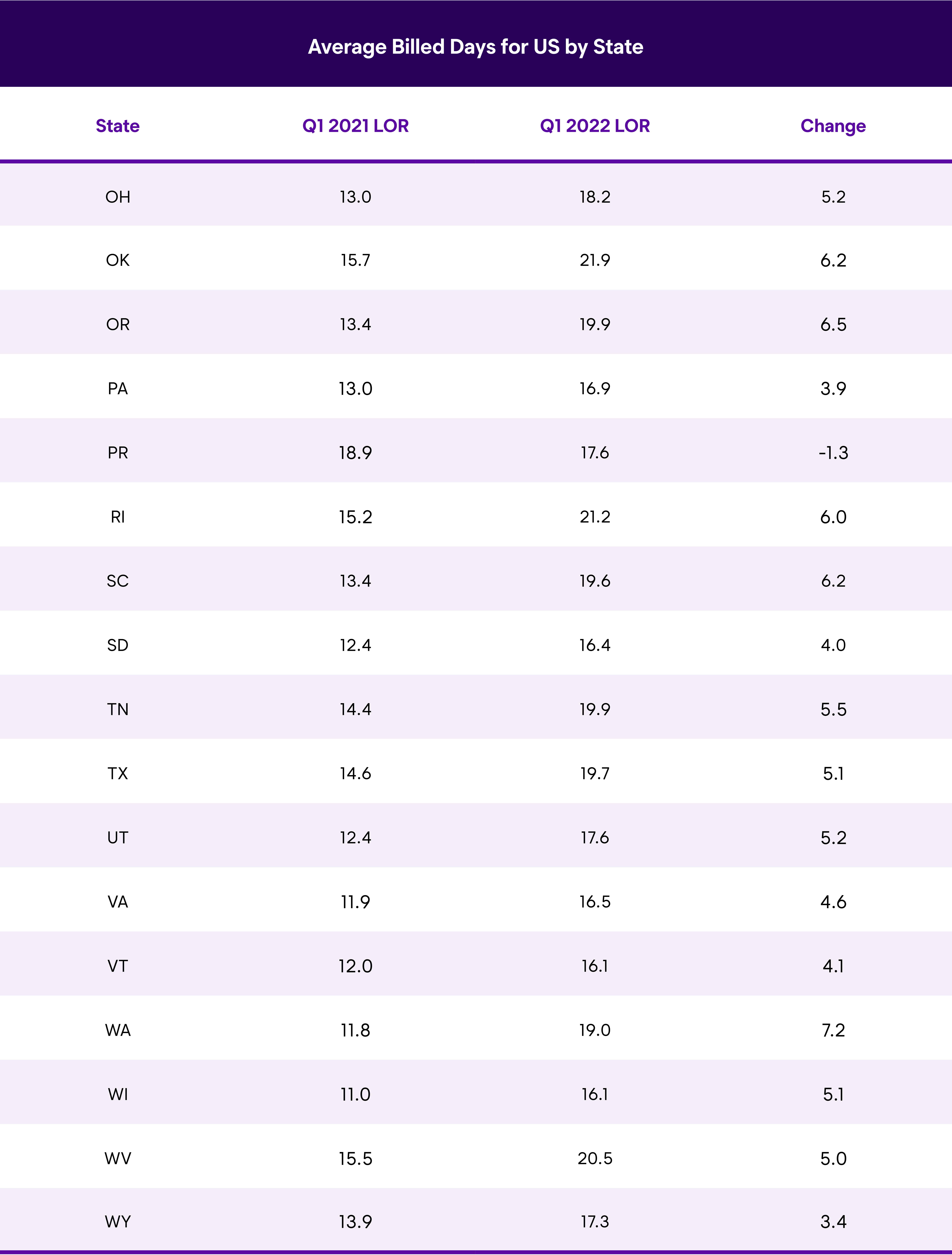 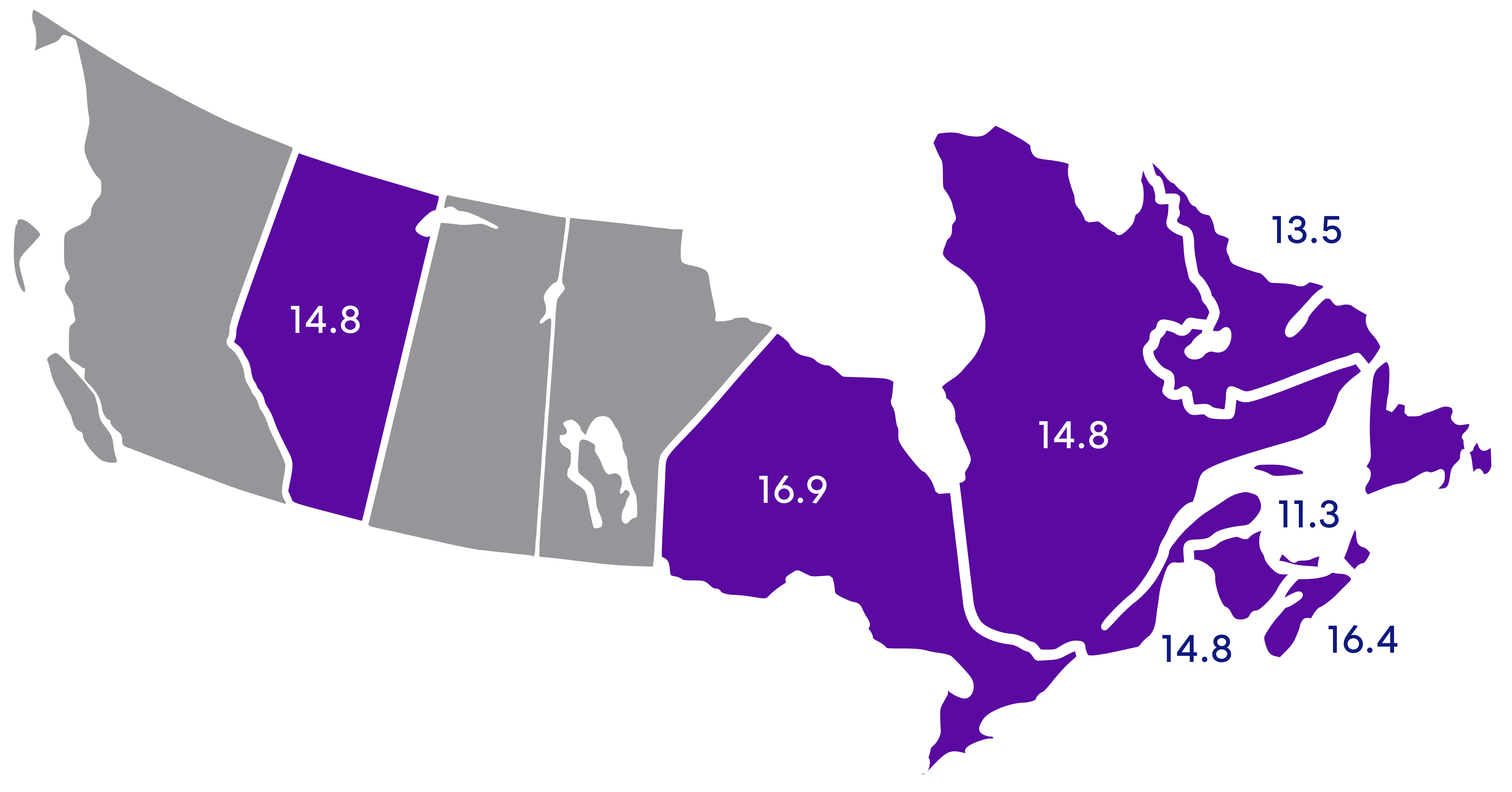 When we reviewed the average Length of Rental (LOR) results for Q4 2021 collision replacement-related rentals in Canada, we noted the one-day increase with mixed results. On one hand, any increase should be concerning; on the other hand, Canada’s results paled in comparison to the U.S. results of an almost four-day increase. We noted that we would be watching the first quarter of 2022 with trepidation.

Total Loss LOR results also had an increase, in part due to the Non-drivable increases. Total Loss LOR was up 4.9 days in Q1 2022 to 15.2 days from 10.3 in Q1 2021. Nova Scotia, Ontario, Quebec and New Brunswick had increases greater than five days, while Alberta’s Total Loss LOR increased 4.3 days.

While some of the Total Loss LOR rise may be attributed to the increased severities of collisions, it also could be impacted by higher Total Loss thresholds and carrier calculations, pushing more vehicles into the repairable category.

According to Mandell, this trend is likely to play out in Canada as well. He observes, “As Actual Cash Values (ACV) rise, we can expect Total Loss frequency to decline as more borderline losses are deemed to be more economical to repair. This has been the case in the U.S., which saw a 16.1% Total Loss frequency in Q1 2022, compared to 17.2% in Q1 of 2021. Such a scenario could impact shop capacity, especially in the face of a tight labor market, and drive keys-to-keys cycle times even higher.” 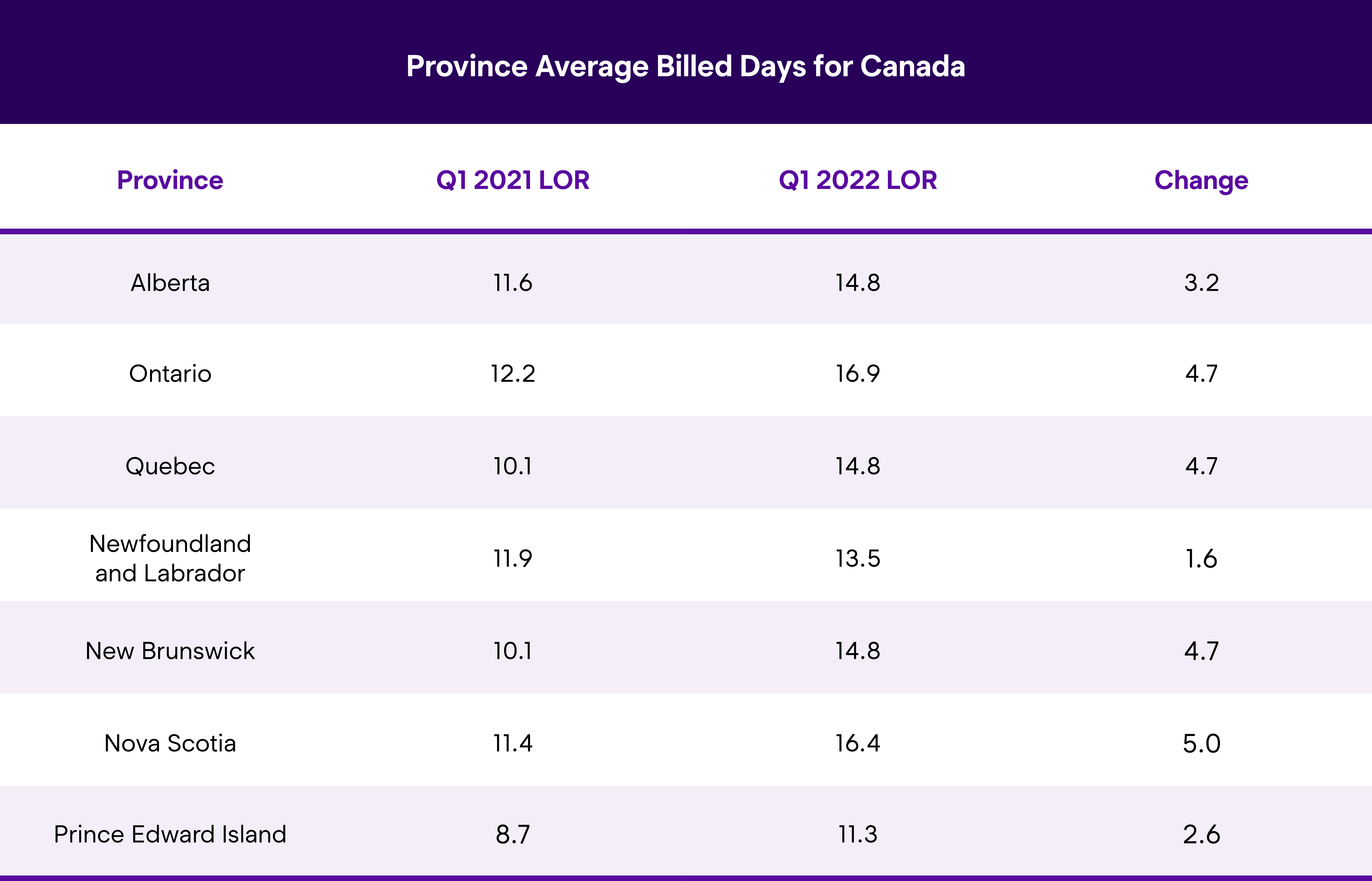 The results for the first quarter of this year are eye-opening. There are many factors affecting everyone in the collision industry, including technician staffing, ever-changing parts availabilities, new and used vehicle pricing, inflationary pressures and new claims processes. Traditionally, the second quarter of each calendar year yields the lowest LOR, but it remains to be seen how these industrywide issues will affect this year’s results. The entire industry will play a part in ensuring all collision-related businesses are aligned, not just to offer procedural solutions, but to ensure our mutual customers receive safe and proper repairs, an excellent experience and peace of mind.

The medical management software provider that you select

As medical costs continue to rise, workers’ compensation payors are looking for methods to identify expenses that can be controlled and ways to han

How Technology and Data Can Enhance Medical Management

Medical management—utilization review specifically—has historically been handled manually, and tends to require a great deal of administrative over